Battlestar Galactica Deadlock takes you into the heart of the First Cylon War, to fight epic 3D battles that will test your tactical prowess.

Take control of the Colonial Fleet from the bridge of the mobile shipyard, Daidalos, and free the Twelve Colonies from the Cylon threat. Build your fleets, protect the Quorum alliance and prepare to dig deeper into the conspiracies of this heroic conflict.

Trailer for Battlestar Galactica Deadlock: Anabasis DLC, showing starships travelling towards an outcrop of large rocky asteroids beneath an unknown planet and mining colony. At another location ships appear suddenly, surprising a fleet waiting under a space station. Scenes are shown of battles breaking out, with winding missiles and huge fiery explosions.

As Level Designer on the Resurrection, Sin & Sacrifice and Anabasis DLC packs, my role was to create both story and multiplayer skirmish maps in Unity. This involved laying out environmental elements to create unique visual atmospheres, encouraging creative gameplay tactics, and hitting story beats as laid out by the Narrative Designer. 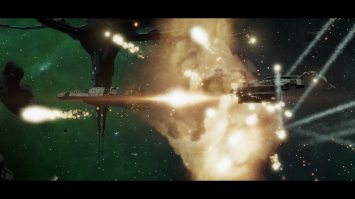